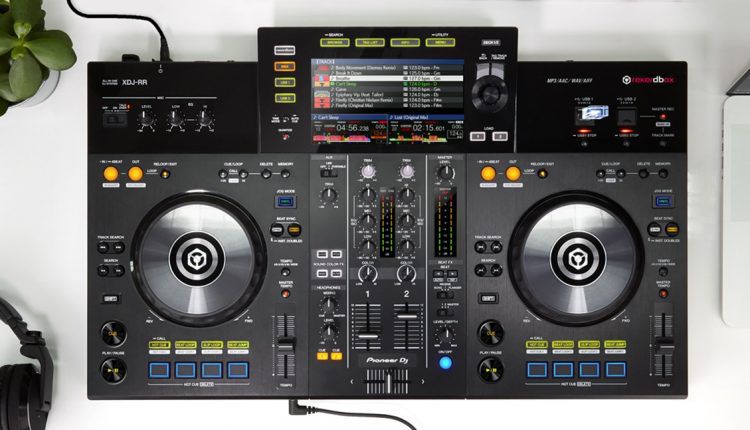 Today, Pioneer DJ is announcing a new, wallet-friendly standalone XDJ-RR. Think of it as a slimmed-down XDJ-RX2, with a $600 cheaper price tag to match. Pioneer DJ is clearly continuing to take aim at the budget market of DJs who are looking to practice on gear that gets them ready for the “industry-standard” club CDJ setup. Keep reading for all the details on the new XDJ-RR.

While many in the industry might have thought that the next announcement in Pioneer DJ’s XDJ lineup would be a four-channel version of the popular XDJ-RX line (XDJ-RZ, anyone?), the company has instead gone the other direction. The XDJ-RR has lots of the same features as the XDJ-RX, but much of it is dialed back for cost (see the main differences section below).

DJs can still enjoy direct-to-USB recording, dual USB inputs, full NXS2 style display on the 7-inch display (no touch functionality, but that’s barely used on the RX2 anyway), performance pads with cues, beat loops, beat jump, and slip loops, and connectivity to Rekordbox DJ’s performance mode (a voucher is included to unlock the full thing) via a single USB-B port on the back of the unit.

Who’s Going To Buy It?

We’re not quite convinced that the market for an XDJ-RR really exists – if you’re looking to have a complete DJ workstation that mirrors a club setup, why not spend the extra couple of hundred dollars (or less if you buy used/refurb) and get all the same FX control that you’d have on a NXS mixer? Being familiar with how Pioneer DJ’s FX work is one of the best things about having an RX2, and you’ll have a much more limited experience on the XDJ-RR.

That said, Pioneer DJ certainly has done very well for themselves in their quest to rule the budget controller market with their DDJ-RB/SB products. Guiding those customers into their next purchase might make more sense at the ~$1,000 price point, and that’s likely where the company sees serious opportunity.

What Are The Main Differences Between The XDJ-RR and XDJ-RX2?

I’ve been a strong advocate for the XDJ-RX/RX2 for a while, encouraging many friends to consider these units for the ease of transitioning between them and club rigs. This new model adds additional points for DJs to consider when making a buying decision – so here’s the main differences as I see them: